Home / Washington DC News / Arrest Made in an Assault with Intent to Kill while Armed (Gun) Offense: 1600 Block of 11th Place, Northeast

Detectives from the Metropolitan Police Department’s Fifth District have announced an arrest has been made in reference to an Assault with Intent to Kill while Armed (Gun) offense that occurred on Tuesday, August 6, 2019, in the 1600 block of 11th Place, Northeast.

At approximately 6:14 am, members of the Fifth District responded to the listed location for the report of sounds of gunshots.  Upon arrival, members located two adult males suffering from multiple gunshot wounds.  The victims were transported to a local hospital for treatment of non-life threatening injuries.

On Friday, October 4, 2019, 40 year-old Jerome Earles, of Southeast, DC, was arrested and charged with Assault with Intent to Kill while Armed (Gun). During his arrest, a firearm was recovered. He was additionally charged with Felon in Possession of a Firearm.

Suspects and a Vehicle of Interest in an Assault with a Dangerous Weapon (Gun) Offense: 4900 Block of A Street, Southeast

Third Arrest Made in a Robbery (Force and Violence) Offense: 3800 Block of Minnesota Avenue, Northeast 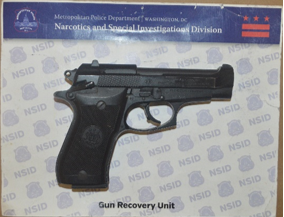