The Metropolitan Police Department (MPD) is pleased to announce that Lt. David Hong has been selected to lead the Department’s highly regarded Special Liaison Branch (SLB). The current SLB supervisor, Acting Lieutenant Brett Parson, is retiring after 26 years of excellent service to the city.

Lt. Hong joined MPD in 2007, serving as an officer in the diverse First District, which encompasses Chinatown, and as a sergeant in the Fifth District, which supports Gallaudet University and much of the District’s sizable Deaf and Hard of Hearing community. Most recently, Lt. Hong has worked in the Sixth District, supervising areas that include Latino and LGBTQ+ communities and partners.

Lt. Hong’s parents emigrated from South Korea to Rochester, New York, where he grew up helping his parents at their beauty supply store. Lt. Hong’s work with MPD has been shaped by his childhood experiences. Watching his parents tackle numerous challenges as immigrant small business owners taught him the importance and impact of positive relationships with the police.

The SLB, which is located in the Executive Office of the Chief of Police, Strategic Change Division, is a model for community policing in its work with historically underserved communities. The SLB works closely with the District’s diverse communities, in particular its African, Asian, Deaf and Hard of Hearing, interfaith, LGBTQ+, and Latino communities. SLB officers respond to crime scenes and incidents to support community and MPD members. An SLB victim services specialist focuses on crime victims in SLB communities to support and connect them to non-police services. The SLB also provides support with incidents which are not necessarily criminal, such as helping to locate missing persons or with death notifications to family members. The Branch hosts and participates in meetings and events, providing the community with information and relationships that help promote a better understanding of interacting with MPD officers in criminal and casual contact situations.

MPD is recognized as a national leader in combating hate crimes. SLB takes the lead for MPD by working closely with communities most vulnerable to hate crimes, while working with MPD units to strengthen our identification and investigation of, and response to, hate crimes. In addition to community members and leaders, SLB works with many outside stakeholders in this effort, including the Mayor’s Offices of Human Rights and Religious Affairs, local and federal criminal justice agencies, and national organizations such as the Anti-Defamation League and Southern Poverty Law Center. Find out more information on SLB here: https://mpdc.dc.gov/sld.

Suspect Sought in a Burglary One Offense: 1900 Block of Lincoln Road, Northeast

Arrest Made in Robbery Offenses in the First, Second, and Sixth Districts

Suspects Sought in a Burglary Two of an Establishment Offense: 6500 Block of Georgia Avenue, Northwest 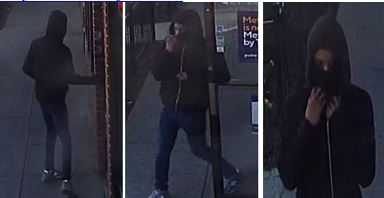