On Friday (February 14), the Hawaiʻi Island Security and Safety Professionals Association (HISSPA) recognized Officer Adam Roberg as the HISSPA Officer of the Quarter for Q4 2019.

Officer Roberg is currently assigned to the South Kohala Patrol Division and he was selected as the Officer of the Quarter in recognition of his outstanding job performance, commitment, and dedication to duty.

Officer Roberg displays a high level of commitment in keeping the Big Island roadways safe for everyone by being proactive with traffic enforcement.  During this quarter, Officer Roberg was responsible for responding to 148 calls of service, the issuance of traffic citations for 198 violations, 6 DUI investigations, and 29 arrests which resulted in 79 criminal charges. As a direct result of his enforcement efforts, he has recovered 3.9 grams of methamphetamine, 34.5 grams of processed marijuana, 2 unregistered and loaded handguns, numerous items of drug related paraphernalia, and the seizure of $336.00.

During one notable incident, Officer Roberg was participating in an Operating A Vehicle Under The Influence Of An Intoxicant Roadblock, and while contacting the operator of a vehicle that had just entered the checkpoint, he detected a strong odor of marijuana.  The vehicle was directed to the screening area and he contacted the two adult occupants.  Using his years of training and experience he gained the cooperation of both occupants and obtained permission to search the vehicle.  Recovered from within the vehicle were two unregistered loaded handguns, firearms ammunition, 3.3 grams of methamphetamine, 10.8 grams of processed marijuana, drug related paraphernalia, and $336.00 seized for possible forfeiture.  Upon conferral with the Prosecutors Office, both occupants were charged with a combined total of five firearm and five narcotic offenses, to include one felon in possession type charge on one of the occupants.

Officer Roberg exemplifies all the department’s core values and is a true asset to not only this organization, but to his community that he serves and protects.  He is very well deserving of recognition as the “Officer of the Quarter.” 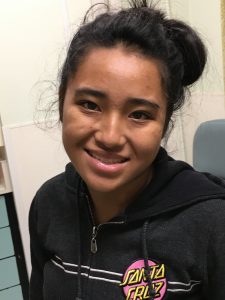 08-22-19 Officer of the Month of June: Officer Jerome Duarte