This year's National Law Enforcement Officers Memorial will host their annual Candlelight Vigil on Thursday, May 13 at 8:00 PM. The event will again be virtual, as events in Washington, DC have been canceled due to the pandemic.

To view the candlelight vigil or for more information about the National Law Enforcement Officers Memorial, please visit: www.lawmemorial.org/NPW

After careful research, the following 11 officers who served the Boston Police Department during the mid-1800's to 1983 will be recognized at this year's national ceremony after the Foundation determined that their deaths could be properly categorized as line of duty deaths. Additionally, their names will be etched upon the Hero Wall at Boston Police Headquarters to properly honor them for their service and sacrifice.

A very brief synopsis on each member is noted below:

Patrolman Dunn was kicked by his police horse in the abdomen and was confined to the hospital until he passed away.

Died in the line of duty after being hit in the head in 1882. He passed away at City hospital from the injuries he suffered.

Patrolman Burnham was working a severe storm and passed away from Pneumonia a few days later.

Patrolman Young contracted Pneumonia after trying to save horses at a fire at the Mt. Pleasant Stable in Roxbury.  Young is also the Officer who jumped in and grappled with a suspect, after the suspect murdered Boston Police Sergeant Frederick Schlehuber and Fred Resse in the District Attorney’s Office in Pemberton Square. At the risk of his own life he knocked the weapon from the suspect's hand and placed him under arrest. Young passed away at his home after the fire incident 10 days later.

Patrolman Giles was getting off a streetcar on the Chelsea Street Bridge in Charlestown, walking towards Call Box #13 to check in, when he was hit by a car. He was transported to the Naval Hospital in Chelsea where he passed away.

Sergeant Montague was ordered to take a strength test per part of the civil service examination for promotion.  Sergeant Montague collapsed and was rushed to the hospital where he passed away. Montague complained before his death that the test caused something to “snap” in his back.  Two other officers were admitted to the Faulkner Hospital after taking the test suffering from strain caused by the test, with one Officer in critical condition.

Patrolman Maher responded to a fire at an apartment in the Back Bay. He was the first person to start a rescue as he ran through the building rousing tenants.  He became trapped on the third floor.  He suffered severe burns and a fractured leg when he leaped from the 3rd floor to the street suffering fatal injuries. He died at Boston City Hospital after being rushed there by fellow Officers.  More than 100 people were saved from the fire and he was credited with saving most of them.

Patrolman Lynch was attempting to stop a stolen car when the suspect’s car ran the officer off the road and he crashed. He was transported to a hospital where he passed away from the injuries he sustained.

Patrolman Reynolds was accidentally shot by a fellow Officer who had tripped and his weapon discharged into the Officer's neck, while they were attempting to stop a motor vehicle near Bromley Heath. He passed away at the hospital.

Patrolman Brown suffered a fatal heart attack after chasing a speeding motor vehicle. After he stopped the vehicle, he collapsed and was transported to the hospital where he passed away. 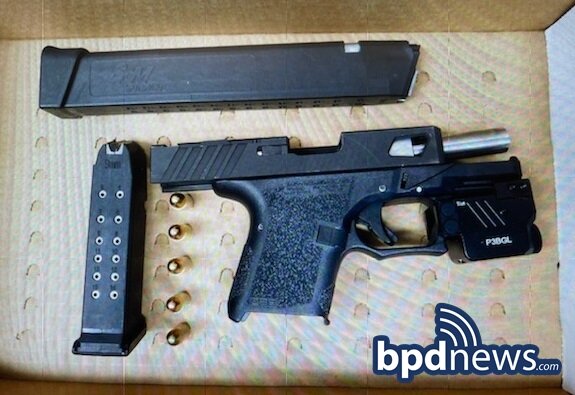